MOVIES!!!!!!! Yup, I watch them. January was filled with movies I’ve never seen before. Yea!!!!! These are my highlights of the month! (Do I use too many exclamation points?) 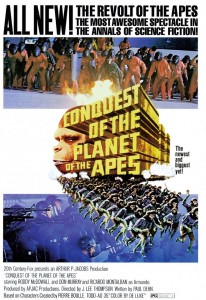 For my first theatrical outing I got to see THE HATEFUL EIGHT, 70mm road show version in 35mm at the New Beverly with my guy Dave and my dad.

I have been turning to YouTube more for movies, especially movies on the Paramount Vault channel. They have a bunch of oldie flicks and that’s where I watched KING CREOLE on Elvis’ b-day! Sing Elvis, SING!

Elvis Sings, Walter Matthau is a meanie and Carolyn Jones is the beautiful bad girl. 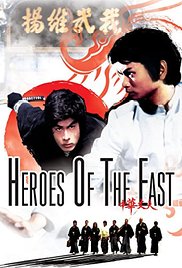 A few Sundays were filled with Kung Fu flicks I found on Netflix; HEROES OF THE EAST (1978) and THE FIVE VENOMS (1978). They really delivered on the fights and action. In HEROES OF THE EAST an arranged marriage of Chinese man and Japanese woman begets a martial arts challenge. The Chinese man must battle 7 Japanese warriors. THE FIVE VENOMS, features the fighting styles of the Centipede, Lizard, Snake, Toad and Scorpion. An old master sends off his last pupil to find out which of his students chose to use their fighting styles for evil. I highly recommend checking them out. Yup.

Also on Netflix I found THE VAMPIRE’S COFFIN (1958) a Mexican vampire movie, a.k.a. EL ATADÚD DEL VAMPIRO. I love watching old Spanish movies (I get to practice my español). 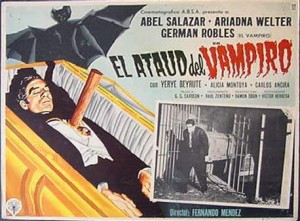 It was a fun film and now I found it was a sequel so I have to seek out part one! But what happens is a doctor steals Count Lavud’s coffin from a graveyard and once the stake in his heart is removed he’s awake and looking for blood. Of course as fate has it the Count is near the woman he desires. This vampire loves phasing through walls and flying as a bat. I truly adore old vampire movies, this vampire stalked the streets in style with his cape and shadow.

My favorite film find of the month was on YouTube called TIME TABLE where the motto is “There is no such thing as a perfect crime, just a lucky one.” A well planned train robbery starts off the film and in true noir fashion there’s more to it than just an old robbery. A few highlights of this film was the mention of L.A. cities and Alan Reed who was the voice of Fred Flintstone. It was a good solid noir but if I say more, it would spoil the ride. 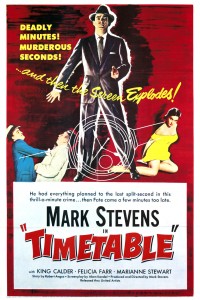 “Every case is an ulcer.”

So those films were among my favorites and below is my list of what I saw the whole month, only 2 re-sees! Here’s hoping for more movies in February and more movie outings! Yup.