You might thing its nostalgia factor, but I say nope. DARKMAN is MY favorite movie.

I’ve seen DARKMAN many times;  if it is on TV I watch it to the end. I’ll usually watch is once throughout a year. I’ve been lucky to see it on a big screen more than once thanks to revival theaters. The theatrical viewing count is up to 6 viewings now, and once on 16mm. 😉

When I was in northern California during my college days, I saw it at the Palo Alto Landmark in 1996, at a midnight screening. That viewing then only cemented my love of DARKMAN and fueled my fandom more.

So here’s some details. DARKMAN is a movie, directed by Sam Raimi, my favorite director. It’s a very comic book movie as everyone is so fond of pointing out. It’s an original character, created by Raimi, the story written by Sam and his brother Ivan. (Other writers get credit for the screenplay too but I’m giving my love and attention to Raimi here.)

DARKMAN is a dark superhero origin tale. A hero who’s going to cross the line, because he’s been pushed to the edge. It all starts with the bad guys, Durant (Larry Drake) and his minions, muscling in on some waterfront property, taking down Eddie Black. There’s a big shootout and some finger chopping with a cigar cutter that’s all a real scream.

Then we meet Peyton Westlake (Liam Neeson), a scientist working on an artificial skin. He’s got his work cut out for him with a trusty assistant, Yakitito, by his side. They are sooo close, but the skin only has a shelf life of 99 minutes.

Next we learn Peyton is a man in love. His girlfriend is lawyer Julie Hastings (Frances McDormand). Julie works for Louis Strack Jr. (Colin Friels), who’s got dreams of rebuilding the city where he lives for a brighter, bigger future. (Still with me?)

So we’ve got some key characters, and now the cause of Peyton’s future troubles is the Belisarius memorandum which Julie has found and incidentally left at Peyton’s place. (It’s ties Strack and Durante together, basically. Bad guys, bad deeds!)

Just when Peyton realizes his liquid skin is photo sensitive and can last past 99 minutes in the dark; (“What is it about the dark? What secret does it hold?”) Durant and his buddies show up looking for the memorandum. BINGO! Once they’ve got it, Peyton, who was roughed up, and burnt up, gets blown up. He is tossed sky high and into the water.

Peyton is found and taken to a hospital because he’s covered with burns. The awesome Burn Doctor (Jenny Agutter) explains the procedure she’s done on Peyton to end his pain. He no longer has “pain receptors” but is surging with adrenaline and can be prone to mood swings due to amplified emotions. (Poor Peyton!!!!!!!) Don’t call him a Freak, ok!

So to make a long story short, it’s time for revenge, research and hope of redemption. 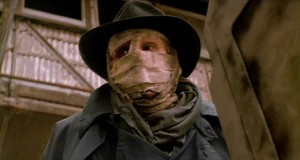 The super hero angle really stuck a chord with me back in 1990. I was already a comic book nerd and superhero fangirl. But a lot of it had to do with already having an appreciation/love for Sam Raimi due to Evil Dead and Evil Dead 2: Dead by Dawn. Those movies, and DARKMAN are family classics. I watched them with my dad and sister. And yes my mom is also onboard with DARKMAN, but she’s more on the roll your eyes side of the fence.

That first screening of DARKMAN was me, my dad and sister in the theater with only 3 other people. It’s like I had the place to myself and the movie was just for me. And of course the very end of the movie, the sighting of the FINAL SHEMP meant a super duper big deal to me then too. And sorry if this is a SPOILER but it is a BRUCE CAMPBELL sighting and being the Evil Dead fangirl I was and STILL AM, I lost my shit! I was all WOAH!!!!!!! OMG!!!!!!!!!!

The movie was made in Los Angeles a lot of it in Downtown and I was familiar with some of those places since my folks both worked there. My mom was actually working in one of the tall buildings during the helicopter scene in DARKMAN. And it turns out the ending was just a block from my dad’s office building too.

It’s all about the little things and whenever I’d get to go by a DARKMAN location in my journey’s around L.A. I’d get a little extra giddy thinking to myself, “DARKMAN WAS HERE!”

I’ve always wanted to visit more of the DARKMAN locations, make a day of it, my own little tour. It’s something my guy Dave and I always talked about doing since we’ve been together. (DARKMAN was one of the things that brought us together, yup!) 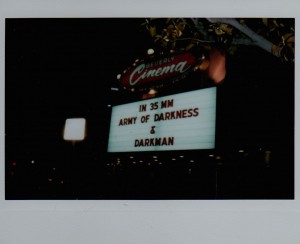 when DARKMAN was recently programmed at the New Beverly Cinema we decided to make DARKMAN DAY a real thing!

Last Friday night, April 17th, Dave and I went to the 9:20PM screening of DARKMAN at the New Bev to start off our DARKMAN weekend.

The theater was packed, we sat in the back rows and I was super duper excited to see Liam Neeson as DARKMAN before my eyes.

Special thanks must be given to two sites that helped us the get exact address needed for our big adventure!

Filming Locations of Chicago and Los Angeles by Chas:

We hit the road Saturday morning, April 18th, bright and early!  Here’s a map of our route!

“Oh, you’ve got to be shittin’ me!” (My favorite line from DARKMAN)

Next up are all the Fuji Instax photos Dave and I took on our adventure. 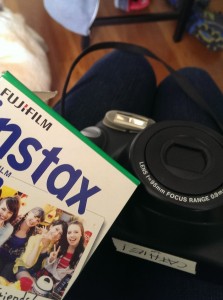 I was the giddiest and happiest gal the entire day as we hit up each spot. I was most surprised by finding Peyton’s apartment which I’d driven by countless times and never realized what it was. I think I believed it really was blown up in the film, but hey, weren’t those model explosions so great?!?!!  But I’m getting ahead of myself.

Here’s each picture from DARKMAN day! 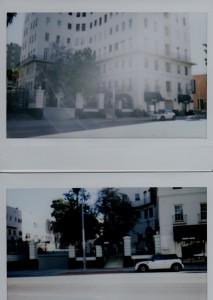 This is the spot after Peyton escapes the hospital and is trying to get Julie’s attention. It was raining night in that scene, but a nice, blue sky day for us. 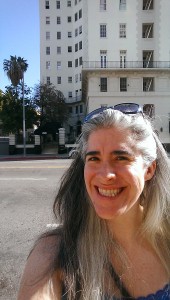 Next up we made our way Downtown and stopped by to look at the Bonaventure Hotel, office of Strack Industries. 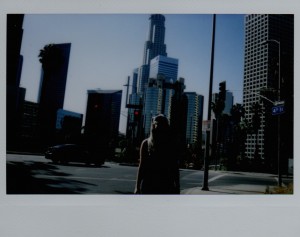 Hi Strack! Be nice to your city!

Then we zoomed back in the car, zig zagging around and quickly snapped a photo of one of the streets DARKMAN sung past while tied to the helicopter. (Oh which reminds me, a funny aside, one day while on a walk, my guy Dave and I were talking about DARKMAN. A woman working on a car overheard and said her Uncle knew the guy who did that stunt, and it was the best stunt he ever did. Totally true story!) 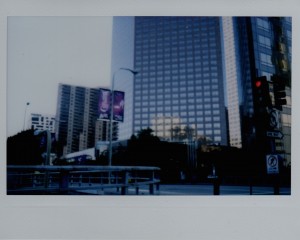 After a little breakfast break at GRAND CENTRAL MARKET we walked through the 3rd street tunnel to be where DARKMAN dragged DURANT to his “demise” with a big helicopter crash. I had never walked through the tunnel before and it was pretty cool. Cars zoomed by a plenty. 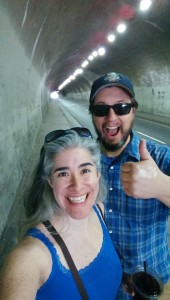 Dave and I in the tunnel!!

It’s a one way tunnel and of course DARKMAN flew in through the other way (movie magic they can change that stuff). Yup DARKMAN had the last laugh! “Burn in Hell Durant, Hahahahaha!!” 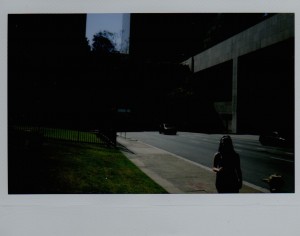 Watch Out For That Tunnel! 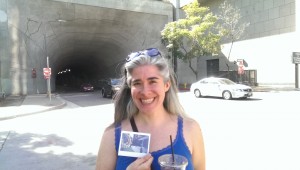 At Figueroa and 7th we found the ending spot of DARKMAN where Julie goes looking for Peyton and we see BRUCE CAMPBELL! 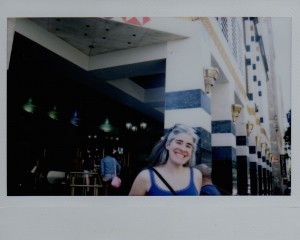 As we drove around Downtown L.A. we found a great parking spot around the corner from Hotel Rossyln. This is the place where Durant’s henchman Pauly gets tossed from a window. 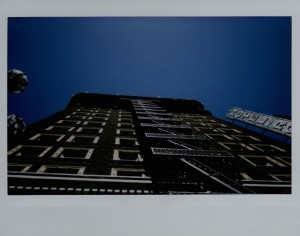 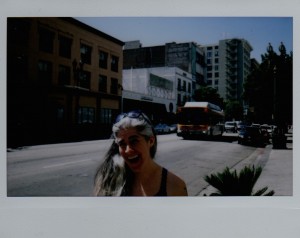 This is where the woman who saw Dead Pauly also saw Darkman Pauly!

Now my most favorite and giddy inspiring spot, Peyton’s apartment building! The spot where Peyton lived and had his lab and it’s where he began his trek into DARKMAN land. 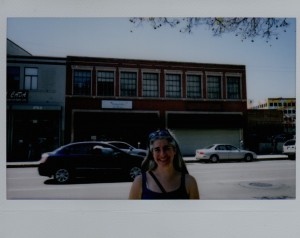 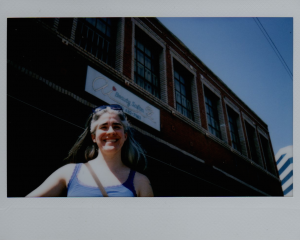 As we were driving around town, and already spending some cash on parking our next stop was a quick drive by photo shot. The steps of the Los Angeles courthouse. This is the spot where Durant comes charging down, after he’s been released on bail because DARKMAN had set him up for armed robbery. “My name is Robert G. Durant.” 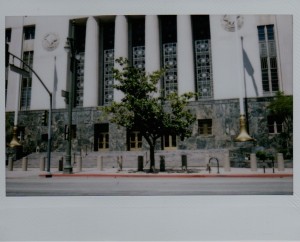 Grab a taxi! Head to Chinatown!

The next logical step would have been Chinatown, but we went to a special spot, another area DARKMAN swung past while tied to the helicopter. It’s a spot you have to freeze frame, but it was found and we went there! 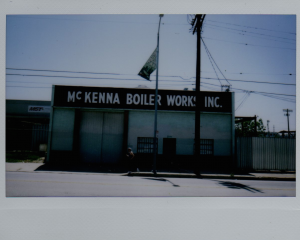 Look out for that guy on that helicopter! 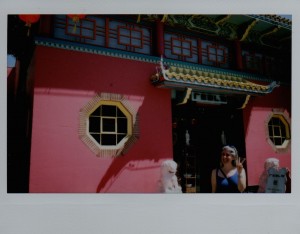 “There’s two of those sons of bitches!”

Ok, we’re almost done!!! But not just yet! We made our way to Hollywood to find the spot where henchman Rick (Ted Raimi) met his terrible demise. It’s that little sewer hole where Rick got mushed! 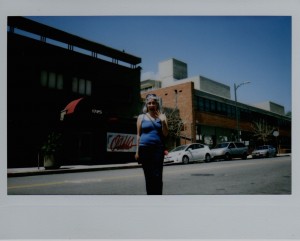 And just around the corner from Rick’s resting spot was the Deli where Pauly and other Durant henchmen make their money drop! I had no idea this was the spot that it was! Jeez! But I know now!!! 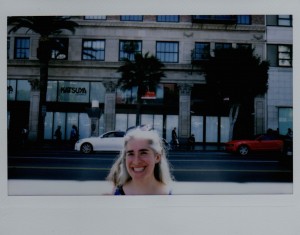 Last and certainly not least was the cemetery where Peyton was buried. I had thought it was the Hollywood Forever Cemetery on Santa Monica, but nope, it was the Rosedale Cemetery! We actually found the very spot where Julie stumbles at the funeral and where Peyton later reappears to her when he’s come back, thanks to that liquid skin! OMG! We found it! 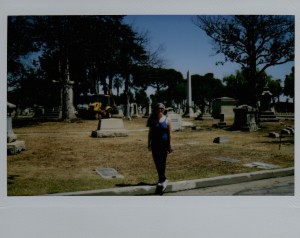 The day then ended with one more screening of DARKMAN, back at the New Beverly. It was screening with Raimi’s film ARMY OF DARKNESS and we caught the double feature. AOD was first and then DARKMAN. This time we got to sit near the front row! And the theater was pretty packed once again. That screening was my 6th big screen viewing, yup! I am one lucky girl! Yup Yup Yup! 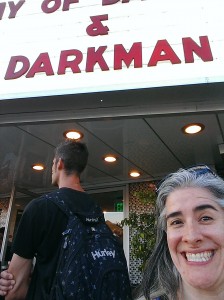 Spazzing out for DARKMAN

Being the fangirl that I am for this movie, I’m often asked about the sequels. I remember vividly driving up La Brea Ave and seeing a DARKMAN II poster on the window of now gone ROCKET VIDEO. I was like “WHAT!?!?! DARKMAN II!?!?!??!!!!!!!” (True Story!) Yes, I rented them immediately on VHS. I find DARKMAN II: The Return of Durant ridiculous (sorry, Durant died in that helicopter crash!). But the movie did have Renée O’Connor who went on to another Raimi produced project Xena! I do give more props to DARKMAN III: DIE DARKMAN DIE, it’s a great title and Jeff Fahey was a good villain. But, NOTHING compares to DARKMAN, my one true movie love.

And that concludes my DARKMAN day adventure! It was the greatest day! I love Los Angeles and it’s my home! It’s the land where DARKMAN was made and I’m happy I finally made this tour and can share it with all who want to hear/read my tale. Everyone should enjoy and have a DARKMAN day too! 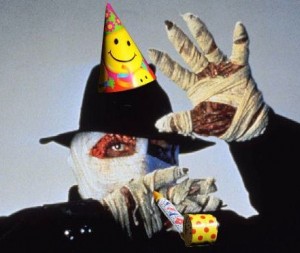 Thanks Meghan for this awesome pic!!