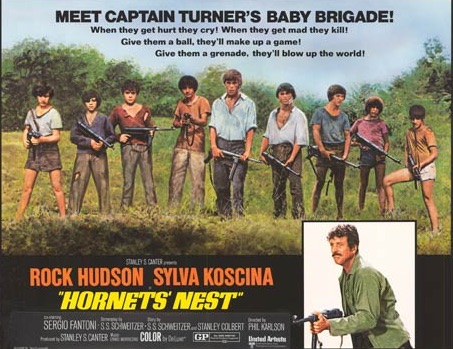 Round 2 of my DVD rental report is here! Yeah, renting movies like it’s 1990! (Oh days of old!) Since the last one I have rented 10 movies from Vidéothèque! There was one of the 10 that I did not watch though! You know how it is, you expect to watch them all right away and then there’s distractions! But dude…9 out of 10 rentals ain’t bad. There were some fun picks indeed.

The movie we did not watch was BIG DEAL ON MADONNA STREET, but we plan to rent it again as I realized there is a sequel to it as well! Yup. I want both at the same time! 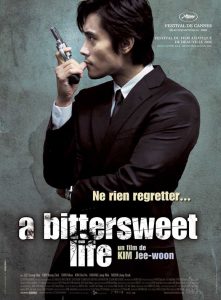 A BITTERSWEET LIFE – As the dvd began the movie felt pretty familiar and after a while we realized we had seen it already! But, you know what we kept on watching because a good movie is worth watching again! Looking back I realize I actually watched this movie in the early 2000’s after it had come out, but that was way before my official tally tracking.

From South Korea, the film is about a mob enforcer who’s asked to follow his bosses girlfriend to find out if she’s cheating on him and if she is, he’s got to kill her and the guy off! You can guess that he decides to not do the deed and suffers later for the choice. It’s not any easier that another enforcer is causing trouble with a rival gang so our hero has a lot to fight against. There’s action, torture and more action! If gang members just took care of each other rather than letting their egos get in the way, but then again, revenge is always a sweet thing to watch, because bad people get what they deserve. 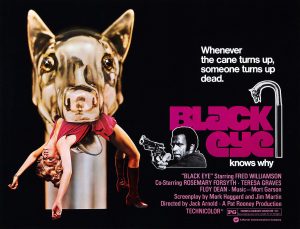 BLACK EYE – Fred Williamson is private eye Shep Stone, he was once a cop and now does his own thing; solving cases and eating peanuts along the way.

An old silent movie star dies, he was involved with the local drug scene and a group of bad guys want the old man’s cane. It all happens to be going on in Shep’s neighborhood and so he’s immediately involved when his neighbor, a local prostitute, is killed. On top of that, Shep is a bit sad as his part time lady is also in a relationship with another woman. Yeah, he’s jelly, but he knows she’s a woman who can do as she pleases.

I really dug this little movie. Fred Williamson is bad ass as Shep. He’s chomping peanuts all the time and he gets his peanuts from the local bar where he takes his calls and does his private eye business.

The mystery in this film ties drugs, the pornography the film business, rich folks, a missing girl and a local cult all into one pot and you can bet Shep sorts it all out with peanuts in hand! 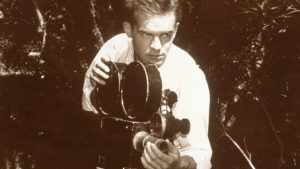 FORGOTTEN SILVER – A mockumentary, by Peter Jackson and Costa Botes, looking back at a silent era filmmaker from New Zealand. They cleverly made this documentary seem quite real and possible, and that’s wonderful movie magic from the start. Their filmmaker Colin McKenzie just about started all the trends of the filmmaking era and no one seemed to know about it as his greatest achievement was a lost film. As Colin’s film is discovered, and restored we learn about his rise and fall and it is all captivating. I really enjoyed this fun little film that jabs at the industry. Anything is possible and when you love movies! Movies let us achieve our dreams! YEA MOVIES! 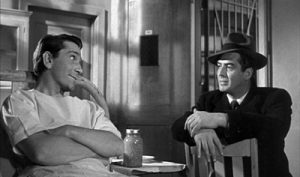 CRY OF THE CITY – I love old movies and I can’t get enough. I’m a big fan of Victor Mature! So we start our story from a hospital where a man is surrounded by family as it seems he’s on the verge of death. Martin Rove is the man in the bed, played by Richard Conte. Turns out Martin killed a cop, and is caught up in jewel heist! Detective Candella (Victor Mature) is on his trail. Candella knows Martin’s family and doesn’t want to see them hurt, but wants justice served.

Both men are from the same neighborhood and each took a different route. The film delves into family, loyalty, honor. Martin is a selfish man, he’s on the run, pushing his mother to the edge and making his life look glamorous to his younger bother. Candella doesn’t want Martin’s brother to go down the same road, and tries to be a better big brother figure. There’s a great cameo from Shelley Winters too as Brenda, a girl who helps Martin out in a time of need. Filled with suspense this film is a noir classic. 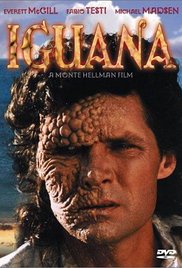 IGUANA – From director Monte Hellman we follow a disfigured man (Everett McGill) who’s lived his life at sea as one of the crew aboard a ship and because of his scaled face he’s been called Iguana most of his life. Since Iguana is a practitioner of Voodoo he’s soon tossed off and when he washes ashore of a small island he offers thanks to his Voodoo gods but then his crew finds him only to torture him again.

Once Iguana escapes he declares himself King of the island and vows to be the kind of ruler who is cruel yet fair. Michael Madsen is Sebastian, who was left on the island too. Sebastian becomes Iguana’s loyal subject after he lost a few fingers to Iguana’s “just” hand. As others wash ashore they must choose to obey Iguana’s law for a chance at life over death.

The film offers up questions of “Do men want to be ruled?” “What will men do to survive?” “Would you rather be free and alone or dead?” Iguana himself is a man questioning existence as he suffers with his disfigurement and being treated terribly all his life, but he only seems to knows how to return hate. Is he just a reflection of all the wrong doing he himself faced?

There’s also a side story of a young Spanish woman who’s lusting for adventure, lusting for a life of her own choosing and when she spends a night on the island with her future husband she’s captured by Iguana and forced to be at his side.

It was a movie that is rumored to come from a true old story. It’s visual and most unusual. Not easy to watch at times, but fascinating take on human nature and survival. 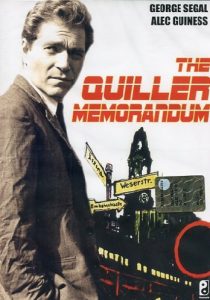 THE QUILLER MEMORANDUM – It does feel like I’m picking movies that, though they’re from days past, they’re more relevant now than ever. There’s spies, nazi, British Intelligence. At this point in time it seems the Nazi are making a return in Germany, but they must be uncovered! Quiller (George Segal) is sent in after the latest operative was killed. His handler is played by Alec Guiness!

Our big baddie is Oktober (Max von Sydow) and he wants to details on Quiller’s people. Quiller and Oktober have quite the back and forth and no one wants to give up what they know. Will Quiller bring down their operation? Can Oktober’s team kill Quiller? Will the Nazi group continue to infiltrate the current state of the country? Only time will tell, but Quiller won’t give up! 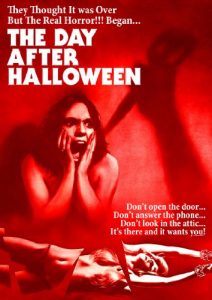 DAY AFTER HALLOWEEN, a.k.a. SNAPSHOT, a.k.a. ONE MORE MINUTE…Oh first things first, as I rented this movie the DVD title was DAY AFTER HALLOWEEN and it has nothing at all to do with Halloween! After reading up on it, those putting out the movie just decided to give it a Halloween title to capitalize on the Halloween movie at the time. So the titles SNAPSHOT or ONE MORE MINUTE are actually more appropriate.

It’s about a young and pretty girl who’s shown off her naked body as a model and is soon tormented, stalked, terrorized…I would say many days after HALLOWEEN. There’s a lot of people attracted to this girl, and every time it is a deadly attraction…the old ice cream man ex BF who’s loved by her puritanical mother, and oddly obsessed and really too old for this 17 year old girl!!! Next there’s the photographer who likes to photograph dead things, the older woman friend who knows the modeling ropes and the old film producer who is more than a little skeezy. I mean there’s a lot of skeezy and misdirect about who could be causing all the trouble. Dun, Dun, Dun!!!

THE PUSHER – Based on The 87th Precinct series by Ed McBain we see what a drug pusher known as Gonzo is doing to the neighborhood as he peddles heroine to kids, couples, anyone he can hook. The Lieutenant and his best detective are on the case! But, the detective is engaged to the Lieutenant’s daughter and wouldn’t you know it, she’s hooked on “the dope” and looking for a fix! Uh oh!

Smack! Dope! Fix! What would you do for that fix? It’s all bad news when smack is on the streets! The Lieutenant is ready to catch that pusher and set things straight! Oh, Keep a sharp eye out for a John Astin cameo! (And a weird coincidence, after watching this movie I got my hands on a few Ed McBain books to delve more into the Precinct stories when I find some time! READING TIME!) 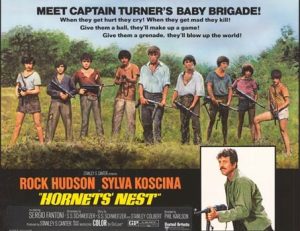 HORNETS’ NEST – A group of boys see their whole town of mothers, grandfathers and children mowed down by Nazis while they were off hiding with the other fighting men and they were powerless to stop them. The same day a group of paratroopers land nearby and are also mowed down by the Nazis but one survives, Captain Turner, played by Rock Hudson (sporting his mustache).

Turner is rescued by the kids and they demand his help to avenges their town! After that he plans to uses the kids to complete his mission of blowing up a nearby dam. It’s a harsh look at war and the effect is has on people, especially children. Children who are forced to grow up fast, children who think they have the answers, children who are ready to kill because that’s all they have seen around them. Innocence lost right from the start.

It was a solid film and the kids were great, and real. Rock Hudson was pretty tough and gruff. 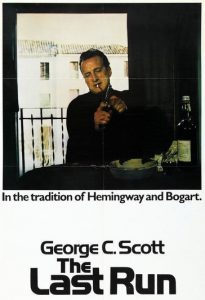 THE LAST RUN – George C. Scott is Harry Garmes, he lives a lovely lonesome life in Spain along the coast where he rents his boat to a local fisherman. Harry is getting older and is looking for something to help pass the time. He used to be a getaway driver and wants to give it another go to prove he’s still got it.

Harry makes some plans, has one last night with his prostitute gal pal (Colleen Dewhurst) and sets off to help a young guy Paul (Tony Musante) break out of jail. Paul makes Harry pick up his gal pal Claudie (Trish Van Devere) and as a trio they go on the run through the Spanish countryside.

When you’re dealing with ex-cons, cops and gangster types it’s never going to be an easy escape. Along the way Harry does his soul searching and does what he does best; DRIVE. The driving scenes were amazing along small mountain roads.  It was a great film and George C. Scott was pretty cool. It was fun to read up on George a bit more and learn that his wife at the time of this movie was Colleen and soon after they divorced (for the second time) and he then married Trish after who he stayed with the rest of his life.

And this now concludes my Round up!! I have already rented a new batch as I finally finish writing this piece and will be back even sooner with more movies to share! Now go out and rent some movies too! Yup! Yup! Yup! MOVIES!