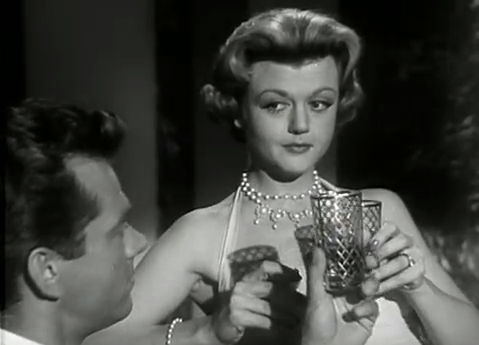 Hey there, I’ll have what she’s having! Movies and Booze, baby! I have found some more fancy beverages from movies that I have been watching these past few months and I’m rounding a few of them up right here for a drinking party! This time out I’ll share a little bit more on these films that caught my fancy, in fact it’s making feel a bit tipsy. 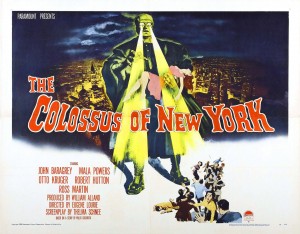 THE COLOSSUS OF NEW YORK (1958): This one was a bit heavy! A super smarty smart selfless scientist, Dr. Jeremy (Ross Martin), is on his way to make the world a better place, even winning a Nobel Peace Prize, when he suddenly dies! The sad is his death is basically his son’s fault! (The lesson here, don’t give your kid a toy that you may have to chase after into oncoming traffic, D’oh!) But, Dr. Jeremy comes from a science family and his father Dr. William is a brain surgeon, his brother Dr. Henry has dealings with robotics! From here Dr. Williams saves the brain with Henry’s help they revive him as a Colossus robot creature. You can bet the happy reunion doesn’t stay happy for long!

In the movie they drink a Martini, but made with two olives and an onion, so it’s like a cross between a Dirty Martini and a Gibson!

Here’s a recipe for a Martini:

It is one part Dry Vermouth and six parts Gin: Pour 1/2 oz of Dry Vermouth and 3 oz of Gin, into a mixing glass filled with ice cubes. Stir well and then strain it into a chilled martini glass, now you can garnish with an olive or some oil from a lemon peel. 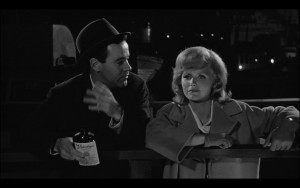 DAYS OF WINE AND ROSES (1962) – I had never seen this movie and finally caught it on TCM one afternoon. This is a truly sad movie, but so good thanks to the actors and the story they told. Jack Lemmon is Joe Clay, a PR man who’s on the rise. When he makes the acquaintance of secretary Kirsten Arnesen, played by Lee Remick, the two fall in love and have a kid which seems to be the start of nothing but happy times. The thing is alcoholism comes into play, drinks each night grows to a need for drinks during the day and Joe and Kristen both develop some bad habits. A quote from the movie that beautifully illustrates the struggle is “Anything worth having, is worth suffering for.”

Before all the suffering the happy times began with a drink called a Brandy Alexander. It’s the drink Joe offers to Kristen to show that not all drinks have to taste alcoholic as it has a splash of chocolate. That Kirsten was a sweet tooth. 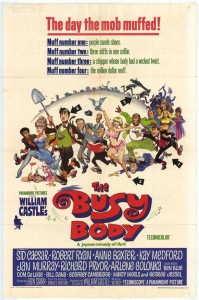 THE BUSY BODY (1967) – This funny little film was featured in my recent movie tally post. Something about it just gave me the giggles and some silly eye rolls. It’s a comedy directed by William Castle, starring Sid Cesar. Sid, as George Norton has to retrieve a body that was recently buried with $1,000,000 hidden in the suit. A series of mishaps and double crosses ensue. Richard Pryor is also in the movie as a police chief.

During a key scene where George is trying to get some info out of a woman he is asked to mix a Scotch Sour. The whole time George is distracted by the flirty woman that he grabs a glass, some cracked ice and lemon juice, which he shakes vigorously. Upon tasting he realizes he had forgotten the scotch. What was really on his mind? 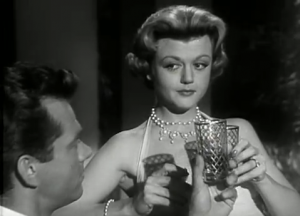 A LIFE AT STAKE (1954) – This is one hot movie and more than a few drinks are had to cool off! Just look at that saucy Angela Lansbury! Meow! It all starts with an out of work architect named Edward. He’s feeling sorry for himself and down in the dumps due to some bad deals leaving him pretty broke. Then in noir fashion an offer that’s too good to refuse comes knocking on his door. Angela Lansbury is Doris Hillman, a rich married woman with an eye for land as a relator. She offers Edward the chance to build and design property for her to sell, but the catch is he needs to be insured to get her husbands ok. There’s nothing to be suspicious about, right?

When Edward and Doris first meet, Edward makes himself a whisky soda, and then when the two meet again it’s a Scotch light, with lots of water for them both! “Maybe a little music will get this party airborne.” (That’s what she said!)

This is Scotch Whisky and Soda Water, it’s 1 part Scotch and 2 parts soda. Take a chilled glass filled with ice and pour in 1/2 oz of whisky and 1 oz of soda water.

Pour 2 oz of Scotch whisky, and 5 oz of water into a highball glass filled with ice cubes. Stir well. Serve and Sip. Sip.

Oh and last but not least, something I learned from A LIFE AT STAKE;  Champagne, “is for good things” and you want to toast like this: “here’s to fun and love!”

But,…if you’re in a Noir movie and celebrating with Champagne you should take it with a grain of salt, something bad is around the corner. Yup.

Now I lift my glass high and say cheers to you for making it this far! May you be happy, healthy and wise! Drink, but drink safe and again never drink and drive! It’s time to find a Happy Hour! Yup!