This past Tuesday night I got to attend a screening of YOUNG FRANKENSTEIN at the Academy in Beverly Hills. The theater was packed and sold out! 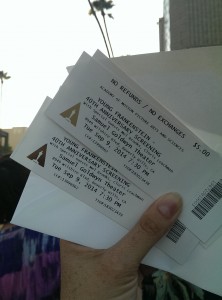 It’s was a special 40th Anniversary screening with Mel Brooks, Terri Garr,  and Cloris Leachman in attendance along with producer Michael Gruskoff. The whole Q&A was moderated by critic/historian Leonard Maltin.  He began with a little history of the movie, reminding us how timeless the film truly is and shared some correspondences from Gene Wilder and Gene Hackman. (Gene Hackman said how he got involved with the movie by asking Gene about his latest project over a game of tennis.)

The Q&A was full of laughs and memories for all to share in. Mel and Cloris had more than a few back and forth jabs at each other. Everyone was very quick witted for sure.

Cloris complained that Mel didn’t stop Gene when he would continue to laugh and ruin takes. The scene walking along the stairs when they first arrive at the castle took like 15 takes. Mel says he couldn’t yell at his star. Terri admitted her mother worked on the film on the costumes and Mel never knew that they were related.

Everyone shared their favorite scenes on down the line. Mel said how the first cut was over 2 hours and after his test screening he cut it down to 91 minutes and delivered the film we all know and love and laugh along with.

One of the most enjoyable moments was when Cloris picked out her grand-daughter who was in the audience and explained to her the “knockers” joke. Cloris stood up, and made it clear that “knockers” had two meanings.

It had been a while since I last saw YOUNG FRANKENSTEIN. It was a lot of fun and the theater was full of laughter. No matter how many times I’ve seen it the jokes get me every time. Oh, Mel and Cloris stuck around to watch too. I could peek over and see Mel chuckling along, and his son Max Brooks was there too.

I’m so happy the Academy put on screenings like this and that I was fortunate enough to attend. For $5.00 it’s a great deal! I know there’s a new Blu-Ray out of YOUNG FRANKENSTEIN, so do yourself a favor and get it, watch, and laugh. (I have to go get myself a copy too!)