Last year I never got around to sharing my Comic-Con adventure of 2014! I’m a slacker, that’s really why. Who doesn’t get distracted by procrastination?!

I really did have such a great time at Comic-Con this year and it helped recharge my batteries, reminding me why I love going to Comic Con and reveling in my geekdom. It was a happy time indeed. It’s one of my happy places, one of my favorite times of year, usually one of my few moments of vacation time, even though it’s a busy on the go vacation!

Comic-Con has changed so much and everyone seems to bring it up more each year, and sure I agree, but for me, this year was just about enjoying it all. With a smile on my face I sought out the things I wanted, staying out of Hall H, wandering up and down the aisles, adding to my back issues comic book collection and checking out artists and things. All the while staying real close to the ASH VS. EVIL DEAD booth, because I am such an EVIL DEAD, Raimi, Capmbell fangirl, yup!

This year I w 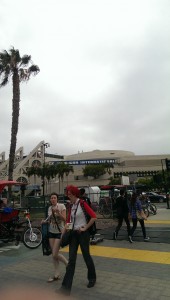 as lucky to be at preview night once again, and my dad was with me yet again too! We are both nerds who love Comic-Con. At preview night getting our badges was painless and quick, after walking a long way and all around to get inside to the show floor we basked in the Comic-Con moment. We wandered, staking out what we might get from Mattel and wandered some more.

I tried to get a Groot headband at Marvel and failed. 🙁

It was that night I found where the ASH VS. EVIL DEAD booth was located and saw how it was set up. Circling around we kept missing the line cut off to get a foam chainsaw and check out the Ash trailer. So, I then made it my plan to go first thing on Thursday. Yup.

My dad and just I wandered the aisles somewhat systematically and did find some comics. 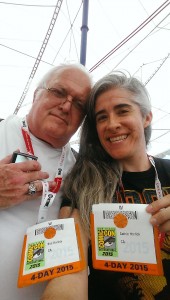 Me and My Dad Luv Comic Con! 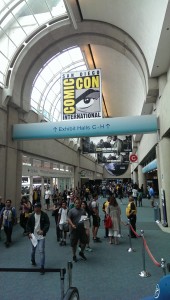 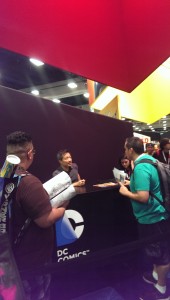 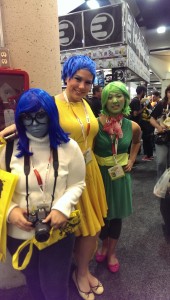 Aww, the Feel the Feels! Inside Out.

I did tumblr some of my favorite pictures each night here’s my Wednesday Preview Night! 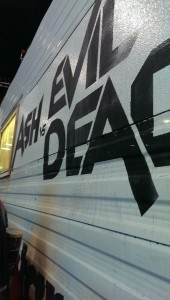 hursday was the first full Comic-Con day and yes, I got into the ASH VS. EVIL DEAD booth and so did my dad (though we got separated by the masses) and in the end I got my chainsaw and my dad got a T-Shirt but I did not get a chance to get the cast autograph; le sigh. (It was worth the try!)

So with that mission complete it was back to just wandering here and there and everywhere. I really do enjoy just ambling about, looking at art, and taking pictures. I like seeing all the other people enjoying themselves too, sharing in the fandom. It gets crowded, people get fussy, but on a whole I say most are happy and happy to be there. I know I was, yup. 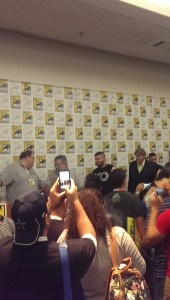 I caught some panels on Thursday! It started with WWE NXT wrestlers and Mattel toys! It really made me miss watching wrestling as the room was packed with cheering fans. A kid in a spidey costume in front of me was up on his chair so excited! After a quick look at a new line of toys the wrestlers all took some time to talk about being on NXT and how much they love it.

After NXT I moved a bit closer to the stage and found a seat to geek out on movies from 1985. I’ve been going to this panel for the past few years and really enjoy listening to movie talk. It’s these movies of ages ago that helped shape my nerdom for sure. With the likes of Robert Meyer Burnett, Mark Altman, Ashley E. Miller and more it was a walk down memory lane. Ah, 1985 the year of Back to the Future, Commando, Rambo: First Blood Part II, Mad Max: Beyond Thunderdome. The talk went on tangents of the awesomeness of Grace Jones, Lifeforce, To Live and Die in L.A., Gymkata, and more! I LOVE MOVIES! 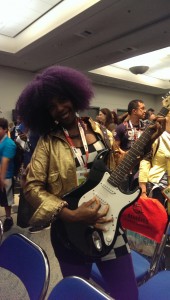 I have more pictures from Thursday here at my Thursday Comic Con Tumblr! Yup! Enjoy and keep on reading! I’m not done yet!

Friday it was back to the floor and time for some panels, the one panel I’d been most excited for! I got my Mattel, Thomas and the Train toys, one for me and my nephew! It was the cutest little toy set and the exciting part  was getting some of the last sets they were selling for the day!

After that line time, I made my way up to get in line to get into the panel room I needed to be in! So I sat through the panel of MAN IN THE HIGH CASTLE which included the daughter of Philip K. Dick. The show sounds cool, with a cool cast, but I’ll probably not be watching soon as it’s out.

The next panel was for the series VIKINGS and it was packed with Vikings of all sorts! I haven’t watched much of the show but sitting there I think I might have to get all caught up! Thanks to being there I did get to score a drinking horn, now I can drink like a Viking, yup! 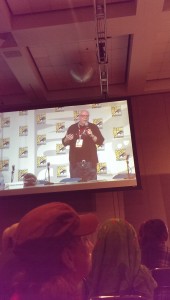 After each panel I moved my way closer and closer to the stage to get a good seat to see what I wanted to see!

J. Michael Straczynski was next to talk about SENSE 8. It wasn’t an official panel sponsored by Netflix, but J. wanted to come out to answer questions and have the first gathering of SENSE 8 fans. He shared about the history of the show and creating it with the Wachowskis’.

I was really glad to catch this one. I marathoned the whole series and loved every moment of it. The Q&A was good too and proved just how much the show really connected with so many people. At the time they were waiting on hearing if the show would be renewed for season 2 and were hopeful, I want more SENSE 8! Yup! Let’s hope it still can happen! 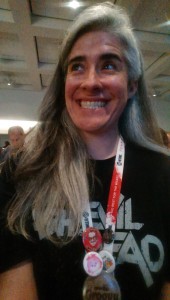 Next up was what I had been waiting for, the panel for ASH VS. THE EVIL DEAD with Bruce Campbell, Sam Raimi, Ivan Raimi and Lucy Lawless!! 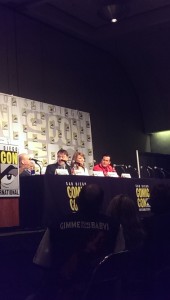 The panel begun with the trailer for the new series coming to Starz on Halloween. It was everything an Evil Dead fan like me could hope for! Bruce, Ash, Deadites, Blood and some laughs. The panel was a blast.

Bruce Campbell gave out some bills, Sam and Ivan made jabs at Bruce and Lucy joins right along. I’ll never get enough of watching Bruce Campbell on a stage, talk to a crowd and rile up the masses.

I really loved seeing Sam and Ivan, my DARKMAN creator heroes! Yup! It makes up for not making into panels of Comic-Con past when I didn’t get to see Raimi the last time he was there! But I was there that day and had an ear to ear grin on my face.

The crowd ate it all up too with fun questions and an impromptu costume contest of those dressed as Ash. Bruce had them come up to the stage and awarded the crowd (and Bruce’s) favorite Ash look a like. HILARIOUS! 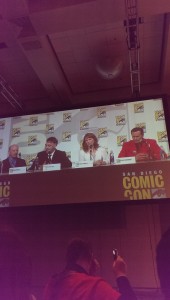 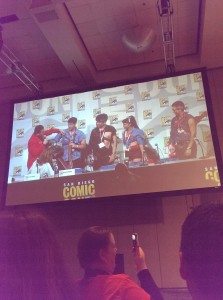 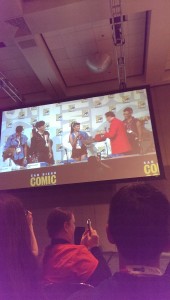 AH, What a good Comic-Con Friday it was!!! I ended the evening after the panel wandering a bit more and then I watched the latest animated DC movie JUSTICE LEAGUE: GODS AND MONSTERS, which I really dug! Before the film started (I watched the second screening) so and I caught some of the Q&A before. The big news was Bruce Timm saying an animated feature of THE KILLING JOKE will be coming soon! Woot! Now here’s My Friday Tumblr Pics! 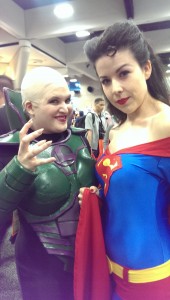 When Saturday came around my dad and I hit the show floor and found more comic books! It was also a day I wandered around more off site around Gaslamp District. And, I got some fun cosplay photos!

I hung out at the Conival at the Stadium. This was the place where Nerdist had more panels and things and I got to see more Bruce Campbell and Lucy Lawless rile folks up for Evil Dead! I will never ever get enough! Yup!

I also went to the panel for MAX BROOKS who just took time to talk to fans and answer questions. He’s a good story teller and holds the crowd. People love his take on Zombies, I do too. I had heard a few of his stories already from panels of the past but like I said he tells stories and is fun to listen to, yup!

Everyone shares their fandom and you can tell he writes about what he likes and is most passionate about. We are all just a bunch of nerds! It’s a good thing.

Then the evening ended as I joined some friends to watch the Masquerade, Costume Contest from under the sails. We had a blast! 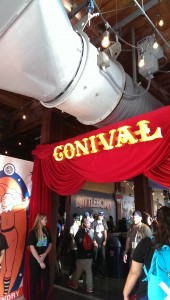 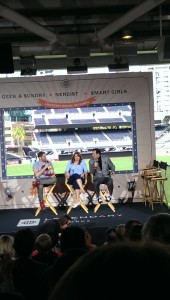 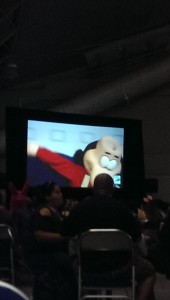 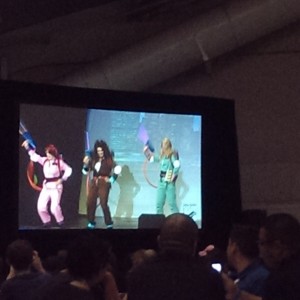 And of course more is at my Saturday Tumblr! So much fun! 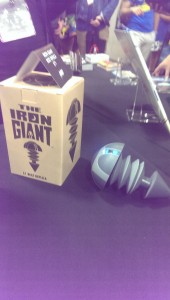 things have to come to an end, we reach the final day of Comic-Con! Comic Con Sunday! I absolutely had a lot of fun, yup.

The bonus was that my guy Dave came on down to wander around with me! We had a full fun day of walking the aisles, up and down and back and forth. We found the HEX 11 booth! We had snagged their first issue at the Long Beach con and finally got our hands on the latest issues.

My dad was off wandering his way around and got the last few back issues too adding to our haul of 90 comics in all! Now we just have to file them all away.

We stayed at the con grabbing a last few bits of swag and made the long drive home. Of course as soon as we landed at home I had to go through my stash and make piles of things! SUNDAY COMIC CON!! 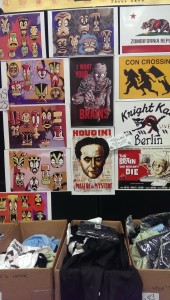 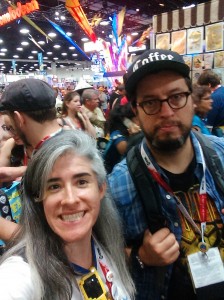 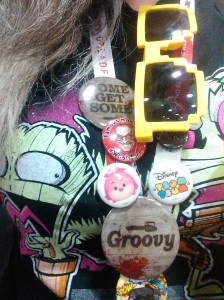 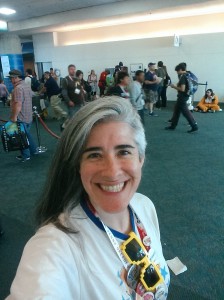 I am already hoping I can go back again next year!!! Fingers crossed, Comic-Con 2016, Yup Yup Yup!