I’ve had a rental membership to Vidéothèque for a while now. Vidéothèque is a cool video store in South Pasadena. My guy Dave and I meander through the aisle looking for movies, just like the good old days of movie renting. It’s fun to just browse, but most times we do rent DVDs and or VHS. It’s a little game between Dave and I to find movies to watch, he picks out one, shows it to me and more often than naught I say “Seen it”! Well, I can’t lie, cause I’ve seen it!  We aim for new movies, things we haven’t seen and when we pick a re-see we get to check out DVD extras like commentaries and what not. We’ve been renting about 5 movies a time, using their 5 movies for $17.99 deal and we get them for a week. I think I’m working my way up to the 100 rentals for $199.00.

At the start of this year we began our rental adventures on January 2nd! I’ve decided to keep track and share the fun of movie renting here on my blog because that’s what this place is for! Sharing fun things that I’ve enjoyed!

THE FOG was a re-see for me, Dave had never watched it all the way through. Who doesn’t love a John Carpenter movie? It’s a ghost story that takes place at a little town along the coast on their 100th anniversary. The ghosts of the past roll in on the fog to exact revenge on local residents! Along for the ride there’s DJ Stevie Wayne played by Adrienne Barbeau, local weird guy Tom Atkins who picked up hitch hiker Jamie Lee Curtis. Oh and Jamie’s mom Janet Leigh is the town woman in charge of the 100th anniversary celebrations! It’s a good creepy flick and still makes me jump no matter how many times I’ve seen it!

RUTHLESS was a good film discovery! Zachary Scott is Horace Woodruff Vendig, a most wealthy man who’s at the top of his game! He’s made it there by being ruthless and it seems he’s considering repentance as he gathers his spurned acquaintances. Through a series of flashbacks we see how he climbed up with love and support but spurned and hurt those he loved as he saw no other way to become rich and powerful. 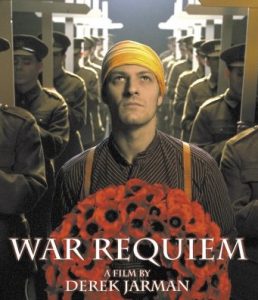 WAR REQUIEM has no dialogue, it’s music from composer Benjamin Britten and tells the World War 1 story of a British soldier who’s trying to survive and fight. We see the toll the war takes on people and it is a most visual operatic movie that also uses old war stock footage. The cast is amazing and features the beautiful Tilda Swinton and a very young Sean Bean. It’s a movie that has to be seen and heard more than described. 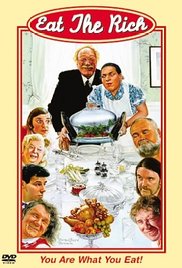 EAT THE RICH was another discovery, something I never heard of before. And since I knew we were going to be renting EATING RAOUL, it sounded like a good double feature combo. EAT THE RICH is a British black comedy commenting on class struggles, the rich rich and politics. Alex is a waiter at BASTARDS, the very fancy place to be place where only the rich go to nosh. Alex hates his job, hates the people and is soon fired. Left unemployed and homeless he is pushed to rebel against the system when he gets a gun killing employees at the unemployment office. Alex and his fellow homeless friend are on the lamb and ready to fight and die for their new found cause! The other side of the RICH adventures is singer Lemmy as an arms dealer named Spider who’s working with another government agent (spy for Russia), who wants to use Alex’s rebellion to ruin Nosher, the Home Secretary, who is campaigning for Prime Minister. Nosher is beer drinking everyman who uses muscle and attitude, hmmmmm, yup. This ridiculous movie, with music from Motörhead, turned out to be incredibly fun! Oh keep an eye out for a Paul McCartney cameo. 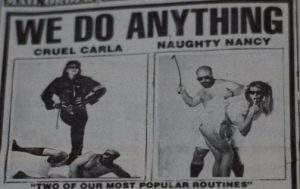 EATING RAOUL is a cult classic and it has got Janus Film cred! I love this movie. I saw it as a young movie watcher, thanks to my dad’s good taste in movies. Directed and starring Paul Bartel he is Paul Bland. Paul is married to Mary (Mary Woronov) and they dream of opening their own country kitchen even though they lack the funds, because they’re in debt! Now, this is their dream and there has to be a way to make it come true!?! It is the 80’s! It’s a time for swingers, swingers who want sex and drugs and they happen to have lots of money! When Mary is almost raped by a swinger, and he’s killed by Paul with a frying pan, they steal his money and decide to become involved in the sex trade! The Bland’s are knocking off perverted sex maniacs taking all their money! Who would miss them, right? When Paul and Mary start making a pretty good business they cross paths with locksmith, thief, jack of all trades, hot blooded crazy Chicano Raoul (Robert Beltran). Raoul joins their scheme and helps to get rid of the bodies and evidence. He also falls for Mary and starts to plot on how to knock off Paul. This film is just sexy sleazy fun with cool cameos like Buck Henry, Edie McClurg, John Paragon and Ed Begley Jr. (which I realized watching again, this role is a reason I probably am not a big fan of his, the hippie rapist.) Anyways, EATING RAOUL holds up and is a great fun 80’s black comedy!